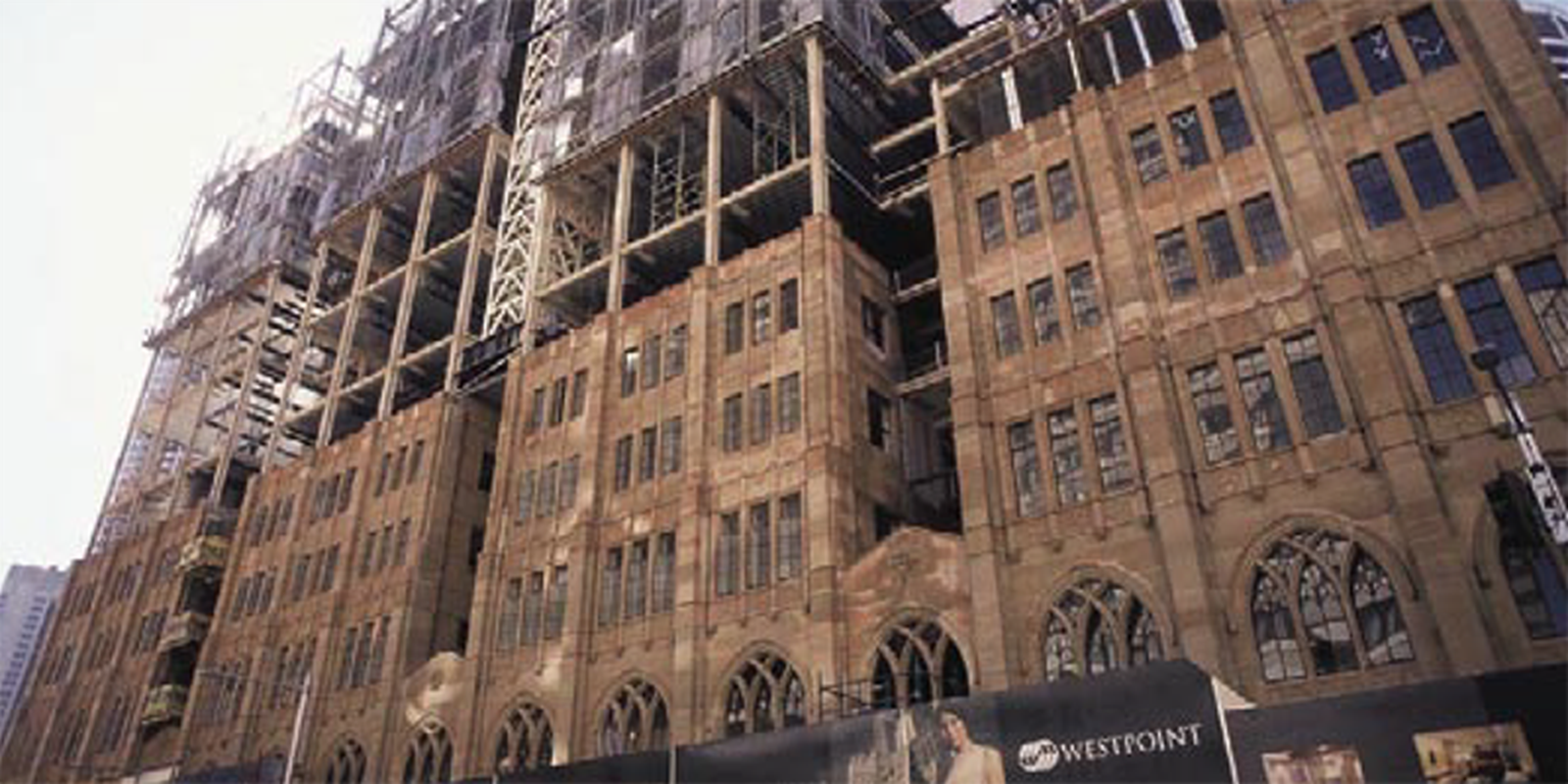 Sydney's magnificent Scots Church building has been given a new lease on life as the Portico luxury apartment complex. The $110 million redevelopment preserves the original structure and façade in a fusion of the old with the new, while accommodating a new steel-framed residential extension above the heritage building.

The original 75-year-old steel-framed structure was commenced in 1929 as the administrative headquarters and place of worship of the Presbyterian Church. However, the great depression hit and economic reality halted construction halfway.

Although ripe for redevelopment, the building languished in dowdy gentility. There was no lack of proposals, but despite coming close, suitors dropped away, daunted by two major drawbacks – proximity to the Sydney underground rail network and a lack of parking possibilities.

The tunnels were one deterrent but the other, in the age of the motor vehicle, was parking. Two previous development proposals failed

to satisfy the requirements of the church and the city council. There appeared to be no way to economically build a carpark into the project.

No way, that is, until Westpoint Corporation, an imaginative developer, saw potential in the site for residential apartments and the possibility offered by a radical carparking solution.

The design by Tonkin Zulaikha Greer (TZG) was chosen in a competition between five architects selected by Sydney City Council. Competitive design is a requirement of all developments in the City of Sydney above $50 million. Their proposal was to convert the disused heritage building and its airspace into predominately residential units, with some commercial and leisure functions on the lower levels. A system of two level units, developed with corridors and lift access at every second level, allowed four extra levels to be created within the height limit, giving a maximum apartment yield.

The project benefited from the City of Sydney archives, where excellent architectural and engineering drawings had been retained. Milton Webster of Van der Meer Bonser, design engineers on the project, said that: “We had to be very, very certain the existing structure was true to the original drawings. Our due diligence included opening and checking beams and transfer trusses and the columns in the exiting structure to check the structural integrity. Information was sourced from the Australian Steel Institute library archives on historical steel sections.

“The controlling factor on the vertical extension was that it had to be light,” Webster said. "Weight was limited by the capacity of the existing structure. The footings are founded on the railway tunnels along the York Street or west side of the building. Covenants, imposed by the State Rail Authority, not only restrict the amount of bearing pressure that can be carried by the tunnel roofs but dictate that any building over them needs to be approved by the State Rail Authority. The high strength and light weight of steel provided the only viable solution.”

Despite its Victorian appearance the sandstone-clad building has a modern structure with steel columns clad in concrete, supporting steel beams and in situ concrete floors. Inside the building, the church (the Assembly Hall) forms a large two-storey void without columns. In the new development the church has been preserved and will be handed back to the congregation.

The building frame had internal column spacing of generally 4.3 metres x 7.5 metres. This configuration, while unsuited to the expectations of a modern office environment, was feasible as an apartment development because of the recent increased demand for inner city living.

The original concept was for a rectangular structure of equal height over all the floor plates. Columns were already designed to take additional vertical loads and had been built with the top extended 300mm above the roof slab. Because it is located on the north side of Wynyard Park, TZG designed the building to step down towards the south, dividing the upper extension into four separate terraces allowing sunlight to reach Wynyard Park, directly to the south.

Gian Callegaro, Manager, Universal Steel Constructions, fabricators on the project, said that major preliminary work was carried out before the construction of the new section commenced.

“Within the existing structure a number of major transfer trusses had to be installed,” he said. “These large transfer trusses, which span the width of the building, were required to carry the new works and to shift loads away from the Assembly Hall inside. Temporary steelworks, consisting of major transfer beams within the Assembly Hall, were installed so the columns in the basement supporting the ground floor could be removed to free access for the construction of the Car Stacker. Once the Car Stacker was built the columns were repositioned.”

The heritage-style apartments on levels two to five, converted from the former administration offices, are mostly single level apartments and complement the building’s exterior.

The first new level starts at six and between levels 6 and 12B all the apartments are two-storey contemporary-style lofts which created an elevation in proportion to the neo-Gothic heritage façade below. The double-storey spaces in the apartments enhance views to the city and sky. Sliding doors access the attached wintergardens, which function as an acoustic buffer and passive solar system, integrating natural light and ventilation.

Two reinforced concrete cores on the northern end of the building provide lateral bracing for the structure. There is a third core about a third of the way in from the southern boundary against the eastern wall. The columns are generally aligned with those in the existing structure, which required no strengthening to carry the additional levels. However, there is a transfer truss between levels five and six and a number of transfer beams at level six.

All the steel beams and columns are Liberty  300PLUS® UBs and UCs in a variety of sizes and weights. At levels six, seven, eight and nine trusses support the primary floors. The primary floor framing comprises both universal beams, as well as trusses fabricated from 100mm wide rectangular hollow sections for the larger spans, which fit within the party walls.

The primary structural floors are at every second level and are composite floor slabs spanning 4.3 or 5.3 metres. In an effort to reduce the weight of the concrete, even the slab depths were varied from 110 to 150mm according to span. Inside the apartments the mezzanine floors are exposed timber joists and flooring or CFC sheeting on steel joists in the wet areas. This was both an architectural and structural requirement. These joists span across the typical 4.3 metre width from party wall to party wall. The floor-to-floor heights were tight, but achievable with steel. The mezzanine floors are supported off the party walls which are a Rondo wall stud system. The main services running out from the core are in the zone above the corridors. These corridors are single height although the apartments are double storey. Within the apartments the services are in the ceilings.

The roofs are an important architectural feature. Gothic architecture, in keeping with its religious concepts, always lightens towards the heavens, so the design of the new building’s roofs lighten towards the sky and are set back so as not to clash with the Gothic façade. In plan a series of 'whale tail' shaped roofs

step up the building. The underneath of the roofs are completely glazed to reveal the view over Wynyard Park and allowing light into the apartments in a fusion of the external and internal spaces. The roof structure is steel framed with metal decks and an expressed steel fascia.

Milton Webster said that: “The Scots Church project is steel fabrication at its best. The job looked simple in that it was just columns and beams, but was complicated by its critical geometry. The expertise and professionalism of Universal Steel Constructions and their cooperation on the job made a large contribution to the success of the project.”