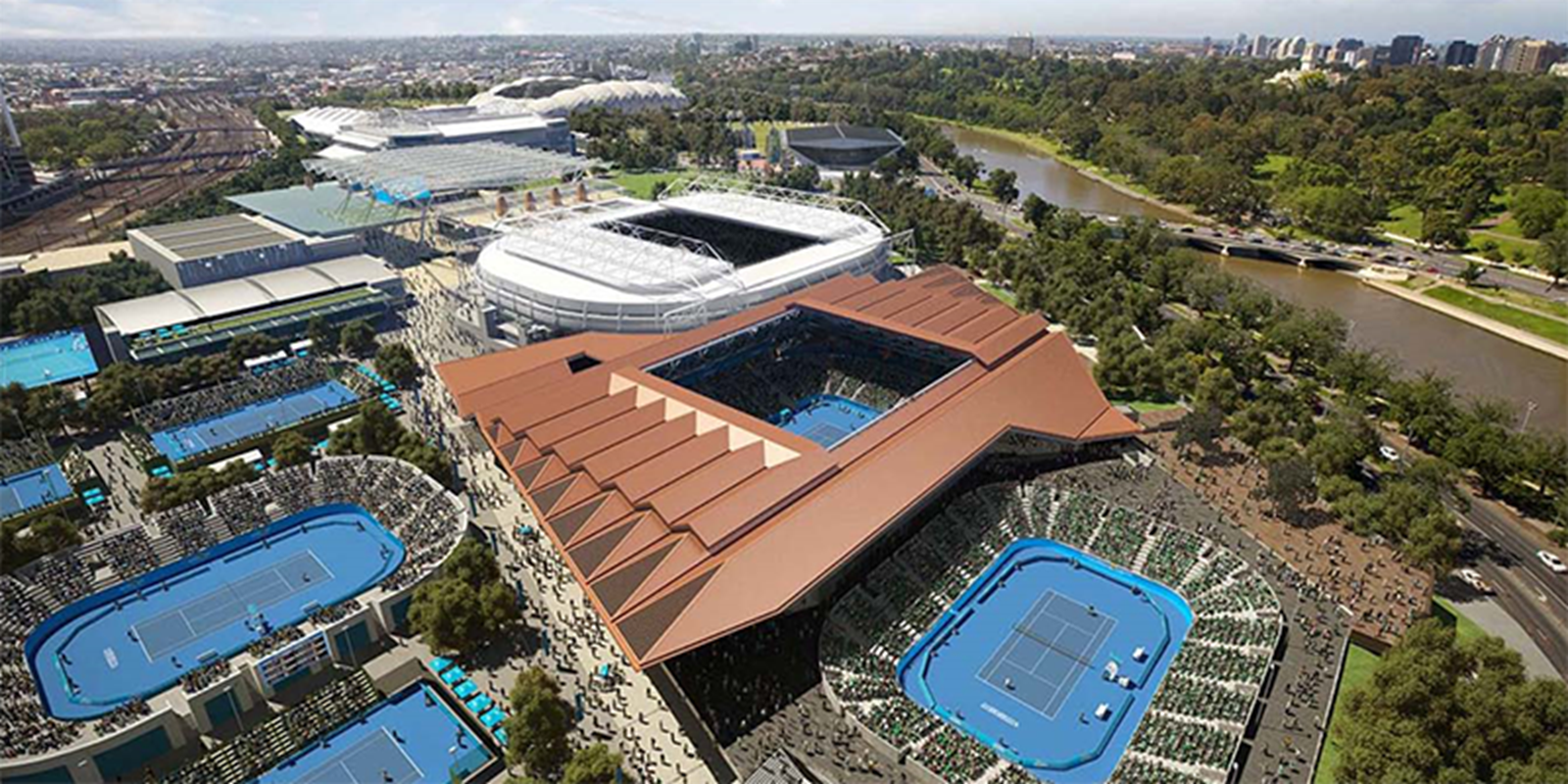 The 2015 facelift of Margaret Court Arena in Melbourne provided it with 1500 extra seats and a retractable ‘folded plate’ and acoustically lined roof.

In response to the Australian Open’s increasing popularity, Melbourne’s Margaret Court Arena underwent a massive redevelopment in 2015to incorporate an additional 1500 seats and a retractable roof. The roof is significant for being an acoustically lined ‘folded plate’ roof that can be retracted or closed in less than five minutes.

The main structural element incorporated steelwork and a steel-framed slab for the northern concourse extension. Additional seating tiers were constructed using the existing concourse as a base, with the addition of steel strengthening beams under the existing slab.

Structural engineering firm Aurecon was appointed by Major Projects Victoria to provide engineering design services on the project, with Aurecon Project Director Mark Sheldon hailing the roof as key to the transformation of the arena into a year-round entertainment venue.

“A stadium’s roof is often a demanding structure to design and build, requiring a significant architectural and structural engineering effort,” Sheldon said. “Collaboration is key: aesthetics must meet engineering requirements of strength, serviceability, and durability.”

Steelwork was used as the main structural solution for several elements of the project, including a steel-framed Bondek slab for the northern concourse extension, additional seating tiers built up off the existing concourse and the unique roof.

Among the challenges presented was the need to build over an existing structure while ensuring the ongoing operation of the adjoining Rod Laver Arena. The new structure also had to be clearly a separate building and demonstrate that it has a smaller capacity. The intent was to develop a building sitting below the level of the Rod Laver Arena roof; however, the tennis ‘high ball’ line meant a sleek roof profile was required.

The solution,developed by Aurecon in conjunction with in conjunction with architects NH Architecture and Populous was to allow the trailing edge of the roof panels to be supported by the fixed roof via a series of seven ‘mini bogies’ for each of two operable panels that measure approximately 57m x 32m.

Supporting the leading edge of the fixed roof, which in turn supports the trailing edge of the operable roof panels, are the two unique major trusses that span approximately 65m. To produce the desired ‘pleated’ roof structure, the shape of these major trusses represents a series of interlocking props and ties, giving the appearance that the top chord of the truss has been omitted.

Utilising the pleated shape of the roof, the operable roof panels consist of a series of folded plates that work as trusses that ‘lean’ on each other, with external members added to accommodate the out-of-balance loads at the perimeter.

Aurecon worked closely with Lendlease and GVP Fabricators to develop the erection methodology for the main roof elements. Each step was sequentially planned and agreed, so that precambers and pre-sets for the various elements could be built in, allowing the structure to take its correct geometry after all loads were added.

The operable roof panels are driven by bogies that feature a single rail rack and pinion system for accurate control of the roof positioning. Aurecon worked closely with Lendlease, NH Architecture and Populous, and sub-contractor Vector Lifting, to develop a system that could drive the roof without overstressing the steel structure during any skewing of the panels during operation.

Preparatory work commenced on site in March 2012, with the completed arena handed over in November 2014 in time for the 2015 Australian Open. In 2016, the Arena was awarded the winner of the Buildings – Large Projects category at the 2016 Steel Awards.