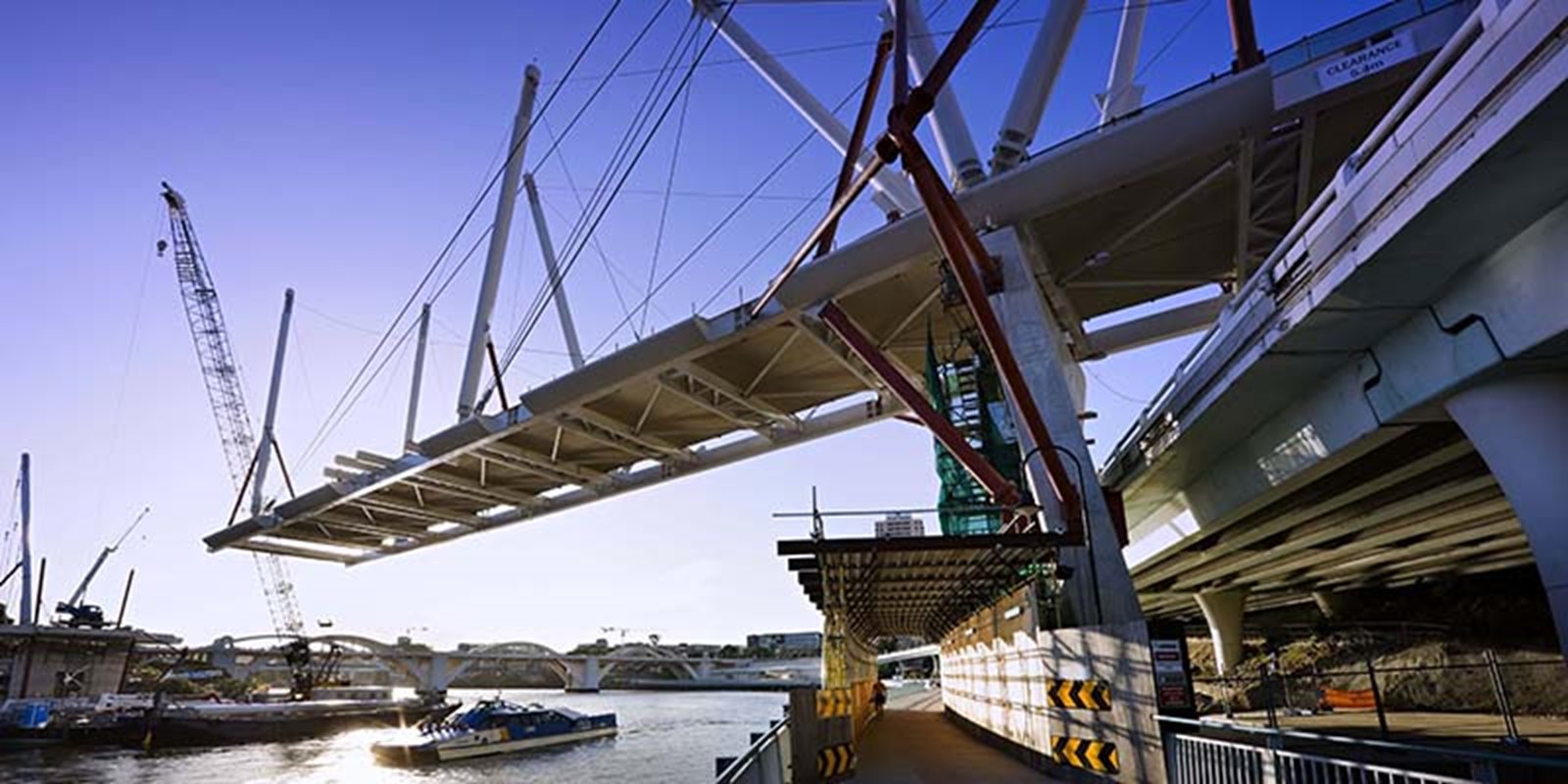 The Kurilpa Bridge stretches from the North Quay end of Tank Street in the city to Kurilpa Point in South Brisbane, adjacent to the award-winning Queensland Gallery of Modern Art where the CBD Reach and the Milton Reach of the river meet.

The multiple-mast, cable-stay design for the bridge showcases an array of cables and flying struts that have been designed to recall the ropes and spars of sailing ships.

The project’s lead contractor, Baulderstone Hornibrook Queensland, designed and constructed the bridge with Cox Rayner Architects and Arup Engineers on the design team.

The bridge design is based on principles of ‘tensegrity’, an architectural and engineering system in which the structural integrity is a synergy between balanced tension and compression components to achieve a lightweight, yet strong and stable structure offering expansive views of the river.

The development’s project manager, Paul Stathis of Baulderstone Hornibrook, explained that it meant balancing the span composition structurally to eliminate the need for massive abutments.

“The tensegrity structure required abutments to conceptually tie the ends of the bridge down to counter the weight supported over the large river span,” Stathis said.

“The unconventionally rather subtle tie-down points allowed for a relatively slender support in the hub of the Kurilpa Park junction and a support on the city side which is compact enough to be constructed within the very narrow fork at the divergence of North Quay and the Riverside expressway.”

He said that steel provided the lightness required to address the aesthetic and structural issues of producing a slim-line structure that appears to float.

“The tensegrity form of the bridge calls for efficient compression members to appear as if they are floating in thin air held simply by thin strands of spiral strand cable,” he said.

“Steel provided the slim-line effect in the deck to meet the many physical constraints of the original brief such as spanning the Riverside Expressway, North Quay and the Brisbane River by maintaining the minimum vehicle and maritime traffic envelopes required without obstruction.

“From the permanent design approach, it seemed natural that the construction approach dealt with these issues the same way, that being to erect the segments as efficiently as possible with conventional erection techniques, hence our decision to erect the bridge in 12.8m long steel/concrete composite segments.

“The segments approach and the balanced cantilever construction method are well within our capabilities and justify our approach of fabricating similar lengths.”

The development embraces similar sustainability measures as the other footbridges in the ‘loop’, including a preference for use of recycled materials and energy-efficient, low-maintenance lighting, water recycling during construction and for landscaping, and a high-specification corrosion protection paint system to minimise maintenance.

The initiative followed the enormous success of the Goodwill Bridge, which is used by more than 53,000 people every week. It’s expected that similar numbers will cross the Tank Street Bridge.