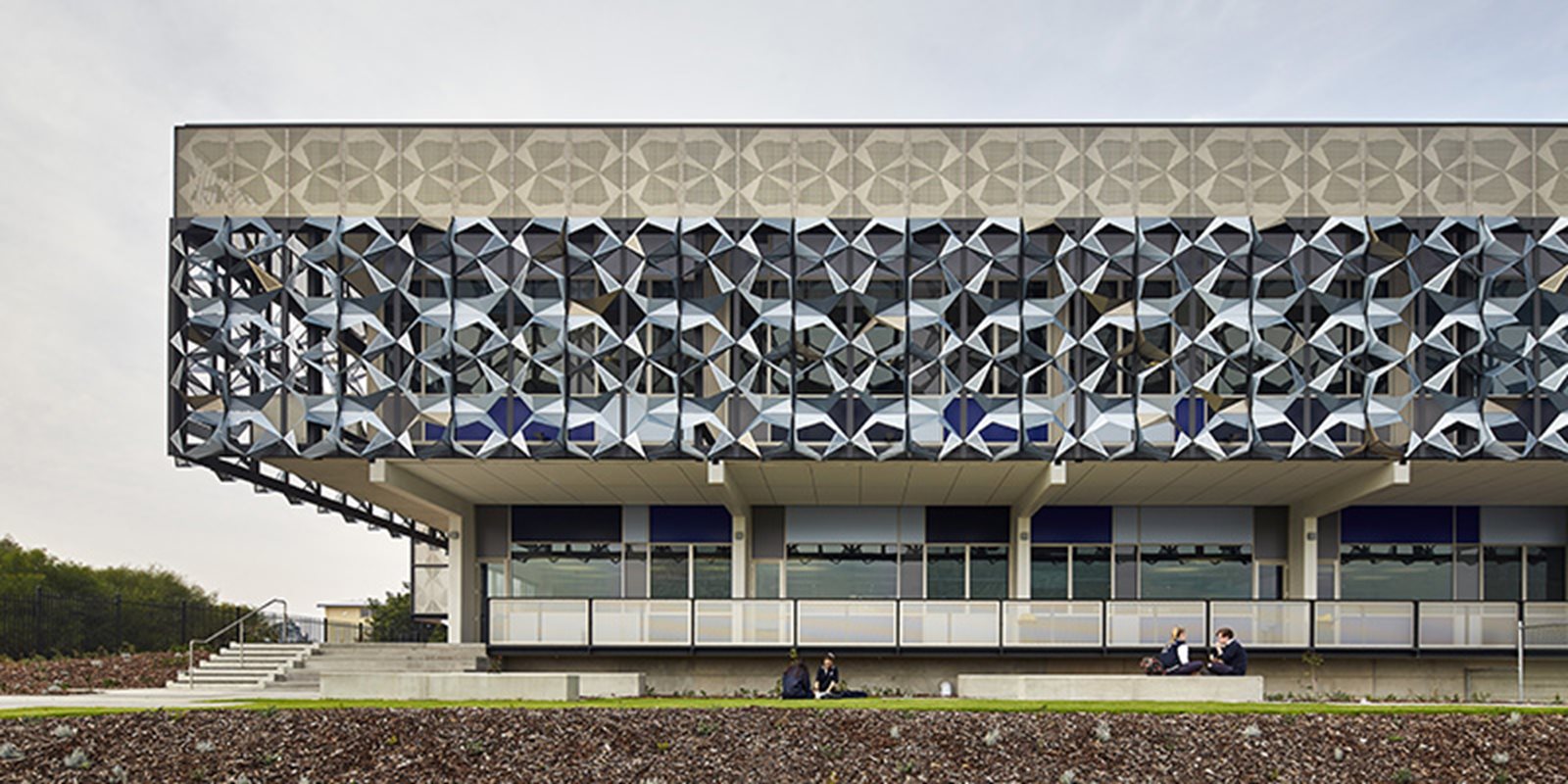 The façade of the John Curtin College of the Arts building was brought to life by using a striking folded and perforated blue and silver screen.

The building is situated on the steeply sloping western side of the John Curtin College of the Arts, with views over Fremantle and out to the Indian Ocean. The building is characterised by a folded and perforated blue and silver metal screen that wraps itself around the façade and provides an imprint to precast concrete cladding panels.

The steel framing for this development was critical to the successful delivery of the project within a modest budget. The efficient steel support structure is seamlessly integrated with the artwork, creating a dramatic statement when viewing the school from the west. This dramatic visual effect was achieved using a modularised framing solution that was designed to be completely bolted together on-site, without exposing any connections to view, which would compromise the architectural intent.

Efficient use of materials

Efficiency of steel structure was essential to ensure the project met its limited budget. This was achieved in a number of ways including the following:

While the artwork in the folded metal façade appears complex, it was rationalised for buildability by creating a number of standard façade modules and making one single plane of structure for connecting the façade components. Through intense focus on the structural and architectural design of these elements, an efficient solution was reached. This outcome was a prime example of a design team expending significant effort on solving a complex problem with a simple, elegant solution

Steel framing was designed to be prefabricated off-site, allowed for a high level of quality control with pre-finished treatments prior to assembly and onsite installation. This was critical, given the coastal environment, to ensure factory-controlled finishing before final applications on site

The external framework around the stairwells was designed for factory prefabrication and a speedy installation. These were installed early in the building programme to allow stairs to be used for site access and allow for early site measure and fabrication of the final fit-off of the perforated screens.

Steel framing was critical to the successful delivery of the building, without compromising project speed or safety, while taking into account the steeply sloping hill the building is situated on. The use of steel framing allowed the following key benefits:

A design allowing for a level of flexibility in construction methodology, particularly for the exposed steel support framing for the sun-shading veil. This included creating a modularised system of steel framing that would allow artwork screening to be installed prior to erection, or following erection, depending on the contractor’s critical path for construction

The external framework being designed to allow install and disassembly requirements for templating the external sun-shading devices. This allowed framework to be fabricated and assembled in place, then removed temporarily for templates and pre-drilling to occur on ground level, without scaffolding to the overall 14m installation height. This significantly improved the safety of the installation, as well as avoiding the cost and time involved in erecting scaffolding

Facilitating a cost-efficient erection framing design that was carefully detailed to avoid site welding any parts of the frame. To avoid site welding, and maintaining the aesthetics of the design, countersunk hollow-bolts were used extensively and bolt heads were strategically located to make them virtually invisible from most viewing angles. In addition to time and cost savings, this methodology maximised safety as welding at heights on a steeply sloping site was avoided

External framework around the stairwells was designed for factory prefabrication and a speedy installation. This was installed early in the building programme to allow stairs to be used for site access, increasing site safety and streamlining the construction program.

The entire upper floor of this visually expressive building was framed in prefabricated structural steel. Welded steel frames were initially documented in 3D, using Revit software to show each frame required and how it interacted with the folded aluminium façade. Using this technique, a visually complicate element was created using a standardised steel framing methodology. This methodology was then shop detailed and fabricated in the steel fabrication yard prior to transportation to site. Once on site the framing system could be quickly and efficiently installed, allowing a dramatic visual effect without compromising the construction program.