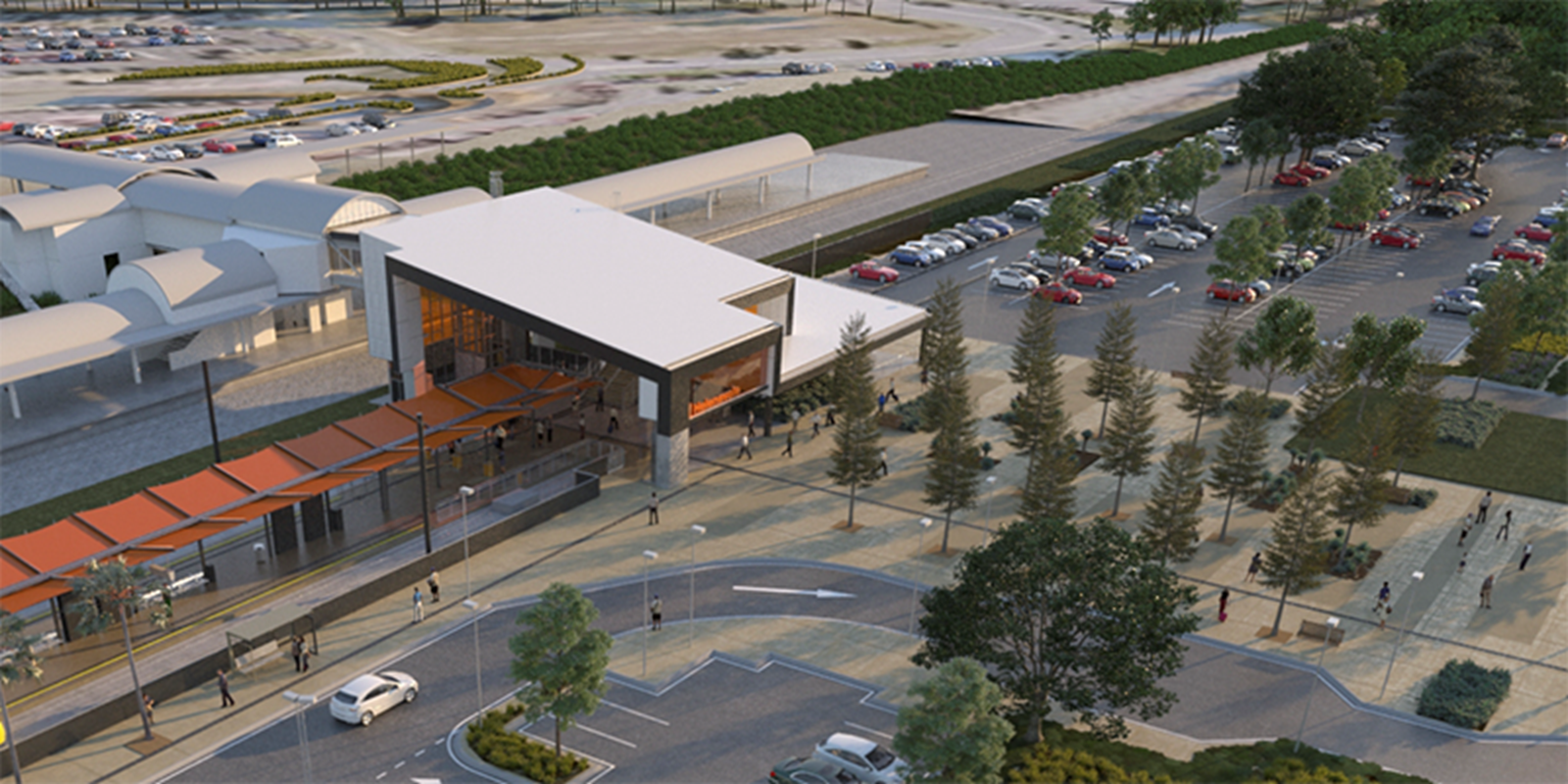 Steelwork is the predominant material being used to construct the interchange between the Queensland Gold Coast new light rail and conventional heavy gauge railway at Helensvale for speed of erection during short railway shutdowns, aesthetics for what is expected to be a busy transit hub and to accommodate large-span requirements common to passenger rail buildings.

With Stage 2 construction having been completed in time for the 2018 Commonwealth Games, Helensvale Station is a braced steel-framed structure supported on a combination of pad and piled foundations.

The lower roof is formed in lightweight steel trusses spanning east to west supported by primary steel beams spanning north to south as well as the blockwork walls of the amenities/staff building.

The lift tower itself is a fully welded frame that is laterally supported at ground and overpass levels and roof in the east-west direction. Tensioned diagonal crossed rods provide bracing to the roof in the north-south direction.

According to project engineer from AECOM, Senior Structural Engineer Conor Kelly, the overpass structure that spans across the existing light rail line linking the Queensland Rail station to the new light rail station was a critical element on the project as it had to be installed within a two-day railway shut down.

“Installing the overpass in one lift and using permanent metal deck formwork minimised propping requirements which in turn allowed installation in the relatively short rail shutdown period and the ability to assemble the overpass prior to lifting in place was not achievable with other materials,” he said.

“The overpass structure is a trussed bridge with composite steel joists supporting a concrete deck on sacrificial metal deck formwork with a lightweight steel roof.

“Two full-height trusses on either side provide an extremely stiff support for the 14-metre span and an anti-uplift sliding bearing at the new station side will allow for differential movement between the new and existing structure.”

He said that adequate support in the east-west direction is provided by the full height trusses and in the north-south direction by moment-resisting frames at each truss node point with a deflection under serviceability wind load of H/240 (13mm).

The full-height trusses were designed with a splice at quarter span and hot-dip galvanized prior to transport to site as separate sections. The truss splices were bolted up onsite prior to fixing the joists to the bottom chord. Once the joists were in place, the metal decking was laid followed by the reinforcement, glazing, roof steel, purlins, roof sheeting and cladding.

The bridge is supported by a concrete portal frame on the eastern side designed to resist impact loads specified by Queensland Rail (QR) and AS 5100.2-2004. It is supported on the western side by the existing QR station structure.

Kelly said that given the nature of the transport hub, the overpass was also designed for collision loads.

“The collision load requirements for the overpass were challenging aspects of the job given that structural depths needed to be minimised to achieve clearance but still capable of taking collision loads,” he said.

“The solution was to design a heavily reinforced slab on metal formwork and spanning this between two heavy-welded WC beams either side of the overhead lines clearance zone.”

He said that it was also crucial to allow for the electrical separation between AC and DC power lines located at the junction of the main station building and the Helensvale light rail platform.

“The existing slab to the eastern overpass support was ramped up, maximising clearance under the structure and ensuring the trains on the Eastern rail line can pass under the 200UC overpass joists while satisfying OCR clearance requirements.

“This solution minimises depth and deflection of the floor system to maximise clearance under the overpass. The two 500WC joists either side of the Western rail are installed to ensure minimum OCR clearances are achieved.”

The overpass access stair is steel-framed with precast concrete treads and in situ landings. Stability of the stair flight is provided by the landing slab at the top of the stair, which transfers lateral load back to bracing elements and direct to the foundation at the bottom. The mid-level landing is stabilised by diagonal strut bracing under the landing.

Steelwork is also used for safety provisions such as handrails and for safety bollards dotted around the station entry to prevent accidental collisions with the structure.

He said that the canopy structure for the new station also posed challenges as it was complicated by the need to run communications, electrical and stormwater services through the columns and arms.

“Hollow sections were critical in allowing us to reticulate these services whilst keeping the structure clean of service runs,” he said.

He said that the station design was also governed by the uplift forces generated by wind on the large roof area with the uplift resisted by the mass of pad foundations for pinned-base columns as reinforced concrete pads.

“For the braced bays, piles are required to resist the uplift due to the overturning induced by the lateral load on the building. The uplift values are too large to be resisted by reasonably sized pad footings.”

Brezac Constructions’ Director Peter Brezac, who manages the complete steelwork package for the project under contract, said the work is primarily driven by quality and the ability to deliver on-schedule.

“Infrastructure work generally has tight budgets, very small lead times but demand the high quality of product driven by an established QA system,” he said. “We tend to specialise on projects that require high levels of quality control and materials traceability.”

He believes Brezac won the work due to the company’s Department of Transport and Main Roads certification, previous experience on similar projects and competitive price.