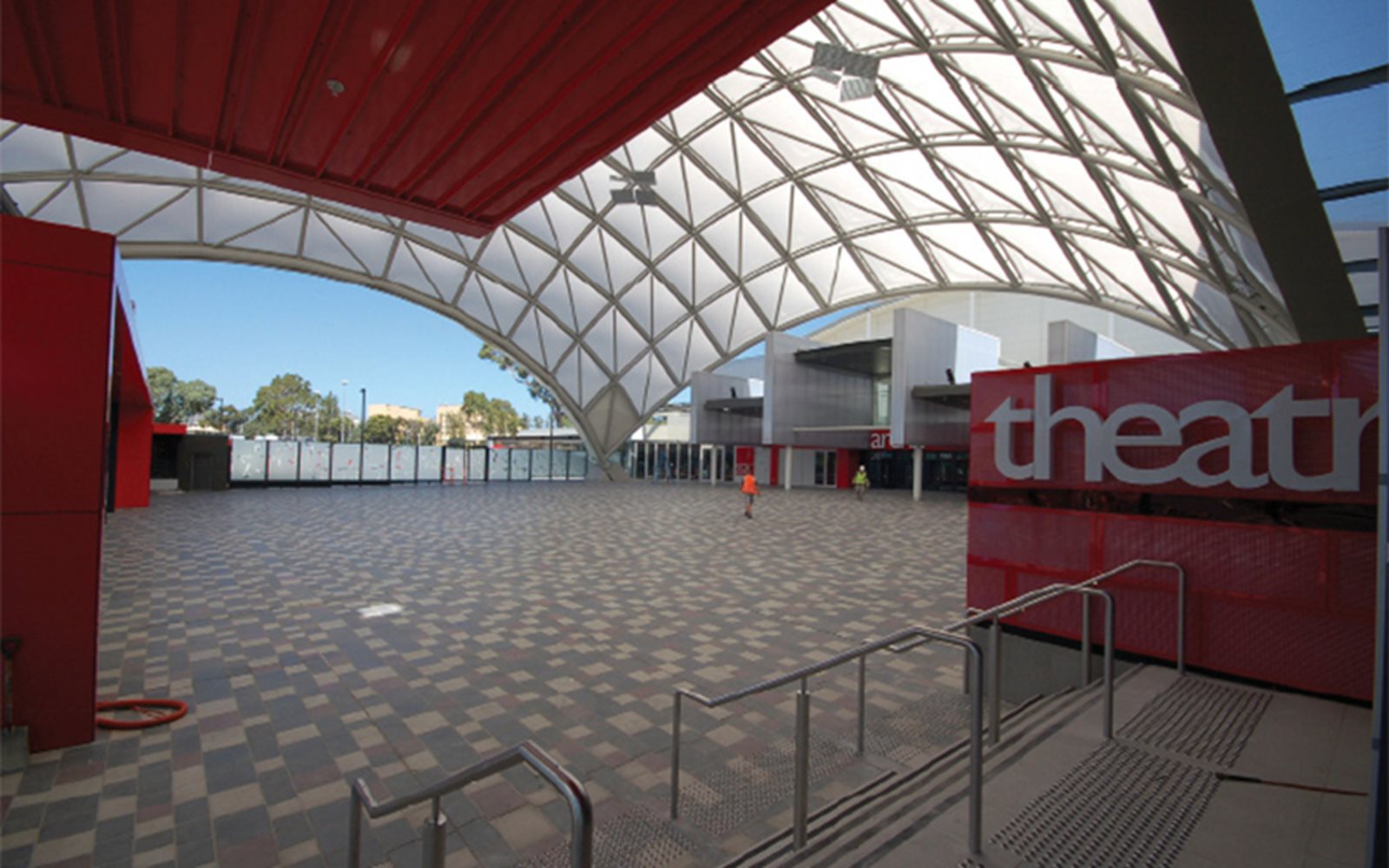 The Adelaide Entertainment Centre utilises a slender steel structure to create three distinct forms, allowing long spans to be held up with minimal supports. The use of structural steel becomes an aesthetic feature, particularly in the dome area, which is enhanced by an innovative lighting display.

The project involved the demolition of the existing Rubicon Function Room and courtyard, demolition of the circular colonnade to the plaza and significant alterations to the Alchemy courtyard and main arena entry canopy to make way for a new dome and performance venue named the Theatre.

The redevelopment was designed as a series of three distinct spatial ideas. The ‘dynamic dome space’, symbolic of the transparency, movement, changing moods and image of modern performance; the flexible box, conceived as a solid pure form, able to reveal a multitude of performance modes and functions, providing a visual counterpoint to the dome; and the ‘interactive foyer’, a visual and functional link between the dome and the box, able to display internal and external imagery. Simplified into overlapping extruded boxes, the Theatre foyer and back-of-house facilities wrap around the Theatre, terminating within the dome space.

The Theatre is capable of accommodating 2500 visitors in general admission mode, 1700 in seated theatre mode and 800 in seat-ed banquet mode. Large operable acoustic walls can divide the space in two, while retractable seating adds to the theatre’s flexibility.

The freestanding ticket box and entry portal were designed as a continuous venue threshold addressing Port Road, with red feature cladding and illuminated acrylic wrapping around the edges to link the two. Both provide the dome plaza with shelter and acoustic separation, as well as a security checkpoint when required.

Use of steel products

Weighing over 300 tonnes, spanning over 40 metres wide and standing over 20 metres tall, the semi-enclosed dome forecourt expansion features hundreds of LED lights designed by DesignInc. Constructed from the same material as the Water Cube Swimming Complex (in Beijing) and supported by a carefully detailed steel frame, the Dome can be individually lit in more than 16 million colours and patterns, creating a visual display for patrons at night.

Practicality in fabrication and erection

After successful trial assembly at Samaras' Gillman premises, the fabricated steel sections were transported to site. With restricted access around the existing building and the segmented arc dome requiring complex propping, bracing and central supports in its unfinished state, the dome’s unique design, while visually spectacular, provided a significant challenge throughout the construction and erection process.

Erection of the fabricated steel sections and pre-cast panels was performed by Samaras Crane Service, with cranes from the Samaras fleet ranging from seven tonnes through to 250 tonnes. Crane services were also carried out by the division for other trade contractors on site and access equipment such as boom lifts were provided as required. Knowledge and experience in complex construction projects such as the Melbourne Aquatic Centre and Port River Bridges was also drawn upon for the redevelopment.

Erection of the fabricated steel sections and pre-cast panels was performed by crane.

Around the time of the redevelopment project, Samaras Structural Engineers commissioned its Pipe Profiling Machine, a CNC-controlled machine providing a myriad of cutting options for pipe sections 50mm O/D to around 600mm O/D with up to 50mm wall thickness, including bevelling and welding preparations with precision accuracy. This technology allowed for efficient and accurate production of steel members.