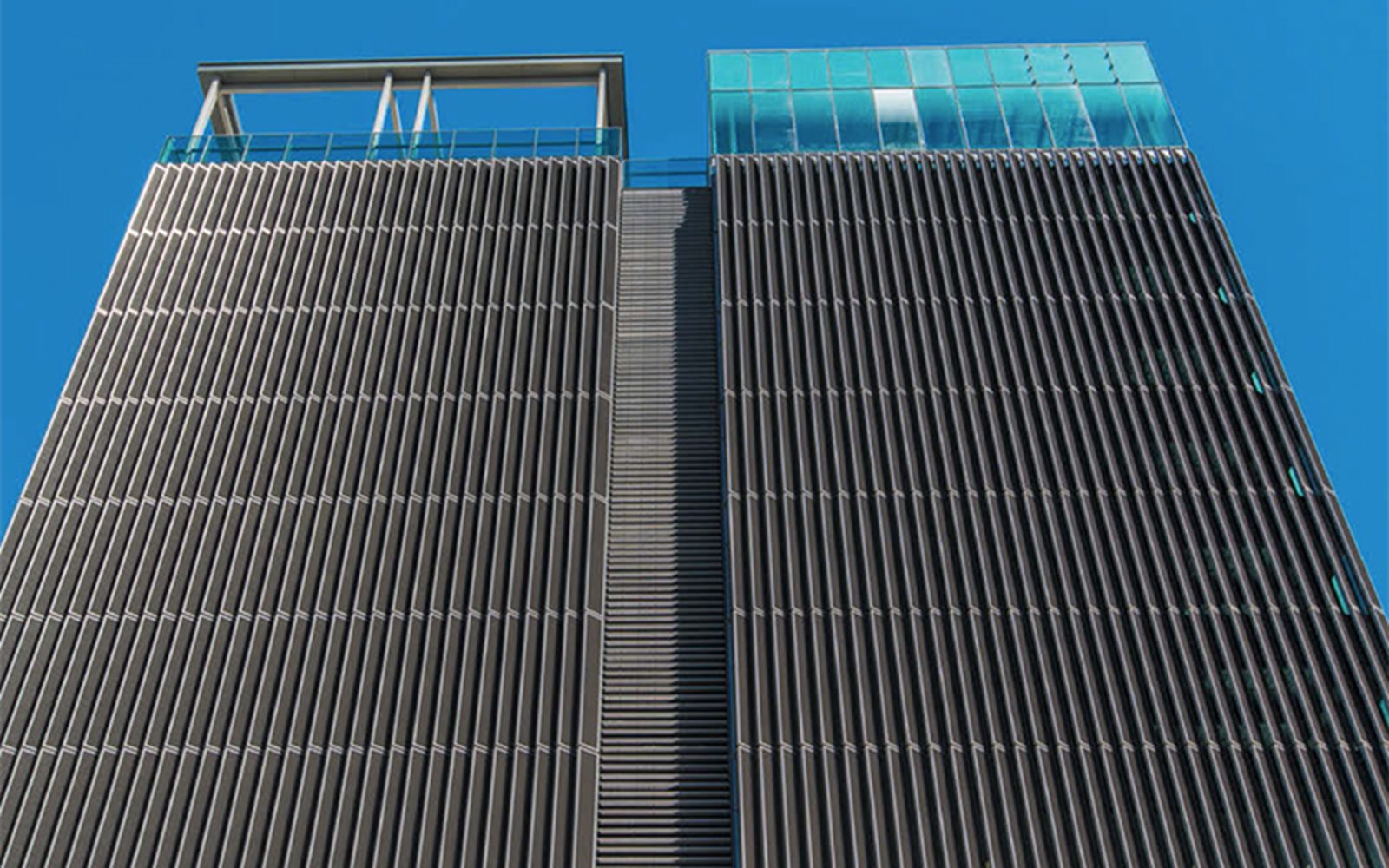 A lightweight steel frame has been adopted to seamlessly construct an office tower high above one of Australia’s busiest railway hubs on a 24-metre high deck.

As there are no adjoining buildings, architectural design freedom allowed for two additional office floors to be incorporated into the scheme with the construction approach.

Grimshaw Principal Matthew Holloway said that when the practice first conceived the floor decks spanning between Collins and Bourke Streets (in conjunction with the Civic Nexus Consortium), the size and positioning of the 200-metre by 32-metre deck was set to connect to the city grid at both ends and provide an intelligent width of floor plate to suit internal office planning conditions with optimum natural light, views and planning flexibility around an offset central core.

“Initially the proposed office development was a singular 5000sqm floor plate campus-style building, which has evolved to respond to different tenant demands to be two separate buildings each with smaller floor plates of 3000sqm and 2500sqm,” he said.

“The deck was designed and constructed from a cantilevered fabricated composite steel and concrete frame to integrate with the dimensional requirement of the platforms and rail environment beneath while supporting a ten-storey office building above with eight office and two car parking levels.

“The requirement for car parking in Melbourne has diminished while the demand for floor plates with the best amenity and value has increased. This was enabled by the design optimising the yield of the deck to enable the team to remove one car parking floor and add two office levels.”

Holloway said that the architectural intention was to create a “calm, considered and elegant backdrop to the undulations of the station roof and confidently define the key entry points into the Docklands precinct”.

“Roof gardens and double-height function rooms at the top of the building act as lanterns which distinguish the primary frontages of the building and provide modern amenity and facilities,” he said.

“Below is an internal street, a requirement of the original planning permit, which sits at deck level to provide public thoroughfare between main roads connected at both ends by vertical transport nodes including lifts, escalators, and stairs.”

He said that the original brief set by the builder was for a 5 Star Green Star building, but through collaboration with the tenants, AGL as one of Australia’s leading renewable energy suppliers, the building has achieved a 6 Star Green Star rating through inclusion of a thermally broken, highly insulated façade with integrated shading supported by the steel frame.­

“Externally though, the biggest design challenge was in limiting reflection from the northern glazed façade onto the rail yard below which would cause major issues for train operator visibility,” Holloway said.

“Hence we had to design a façade screening system that enables views out and light into the office environment without exposing any reflective glass surface. This system was tested with specialist computational systems to mitigate the glare and had to be proven and signed off by Public Transport Victoria and the rail operators.”

The busy railway environment presented challenges for vibration control that were also addressed by the construction design approach. Marshall Day Acoustics found that although the design reduced  rail vibration, in sensitive areas where vibration-generated noise or re-radiated sound is likely to be a problem, floating floors have been used.

“Rail vibration is transmitted through the structural columns into the deck structure and from there into the new composite steel and concrete beam buildings rising above the deck,” Tim Marks from Marshall Day said.

“Although there is some attenuation or vibration loss along the way, the rail vibration was still detectable in some areas, but the use of concrete in the deck portal frame and transfer beam structure provides high damping and maximum vibration attenuation when compared to other lightly damped and lightweight structures.”

Director of the project’s structural engineers WSP Structures Peter Hindmarch said that although the practice previously used composite steel and concrete beams and columns as individual units, the transfer deck is unique in that it created a portal frame and transfer beam structure as a complete unit.

“The steel shell structure was designed to provide a simple working deck to allow installation of reinforcement and post tensioning without occupation,” he said. “In the final case, the frame was filled with concrete to create a combined steel shell and concrete portal frame transfer deck. The superstructure overhead was originally detailed as a reinforced concrete frame but had the flexibility to be changed to composite steel floors.”

He said the transfer deck from the rail station redevelopment was almost complete and ready for the construction of the new superstructure with the car park ramp, the northern entry slab and lift pit bases constructed as part of the new building. Prefabrication and simplicity of bolted connections enabled construction to keep within tight windows available while the site was under occupation.

“The components needed to be as large as possible and lightweight, hence the steel shells. Reinforcing and pouring of concrete was completed after the steel shells were erected and made safe outside of occupation time,” he said.

Hindmarch said that the individual steel shell components were constructed as single units that could be installed without propping or bracing for extended periods. As part of the structural design, each component was checked at pivotal stages of construction – transport, partial erection, lifting, concrete pours and final condition.

ASI member GVP Fabricators utilised its own in-house CNC plasma cutter for all connection plates and fabrication of all steel members took place in its 5000sqm facility in Mordialloc.

GVP manager Steve Downes said the project had several factors making site works more difficult than usual. Works carried out over a main Melbourne railway station, together with the only street frontage being off Collins Street, meant that no loading bay could  be established.

“The project team developed a construction staging plan that utilised the installation of larger temporary hoardings over Wurundjeri Way, which allowed the tower cranes to be installed outside the building envelop and enabled the establishment of the main site delivery area for all steel/construction deliveries,” he said.

“Structural steel was specified in the design to allow large pre-assembled units to be manufactured off-site to overcome the constraints of working in the busy rail environment, reducing the time frame required for site installation.”

He said the working window allowed during rail occupations was typically only three to four hours per night to install the components.

“The main structural columns, such as crash barriers to support items like the north entry pavilion and south entry pavilion, also had to be designed to withstand impacts from vehicles besides structural support due to the railway environment.

“To overcome this problem, large fabricated steel plate shells were designed to allow for temporary structural support together with being permanent formwork. Adopting steel in the design allowed the crash barriers to be manufactured in the workshop, facilitating all concrete reinforcement to be installed off-site and required no propping or form working to take place.”

He said that together with the use of composite decking in the design, this allowed for a formwork-free construction site permitting follow-on tradespeople to access the floors much earlier than a concrete structure would.

“The structural columns were manufactured from 610 diameter CHS with pre-installed ‘reo’ cages which further reduced formwork and on-site labour requirement.”