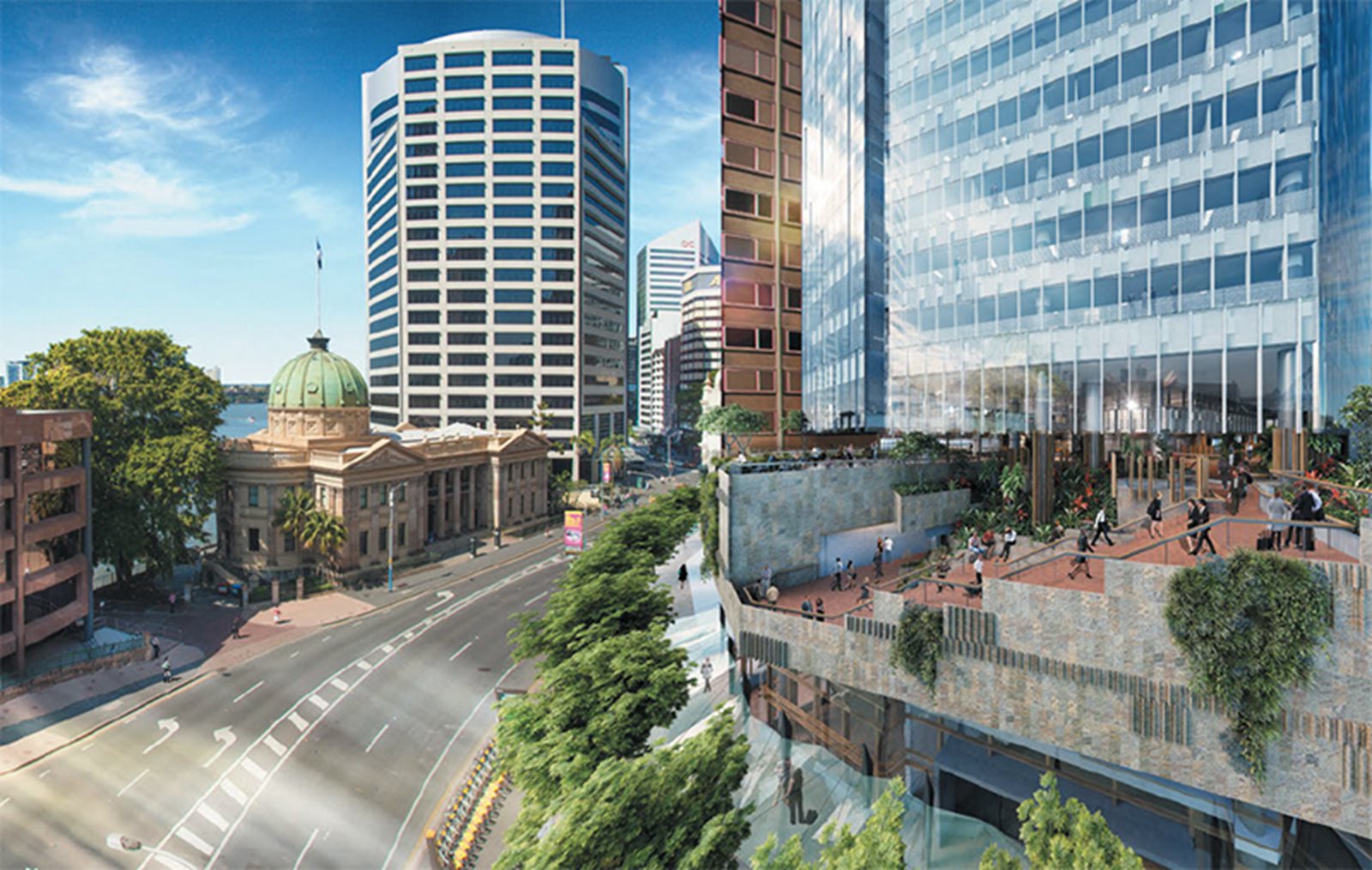 A steel-intensive approach has allowed an innovative parallel beam ﬂooring system to further speed construction of the new 480 Queen Street ofﬁce tower, allowing a new ﬂoor to be added each week and with beneﬁts derived from using offsite fabrication.

The building is targeted to be the only premium-grade, 6 Star Green Star rated tower of the three new ofﬁce towers currently under development in Brisbane. It comprises approximately 4000 tonnes of steel made up of approximately 2500 tonnes of universal sections, 500 tonnes of fabricated beams and 1000 tonnes of tubular columns.

Aaron Toscan, Associate, Buildings project engineer at Aurecon, said it's the ﬁrst steel building of its size in Brisbane. It also utilises a steel system that has never been used in the city before on a building of such large scale. He said that the ﬂoor construction uses parallel continuous primary ﬂoor beams with continuous secondary beams above supporting a steel formwork-supported concrete slab.

“Given the multiple layers of structure, particular attention has to be paid to diaphragm action to transfer column restraint actions as well as wind and earthquake loads to the lateral resisting core,” he said.

He said for the parallel beam ﬂooring system, beams are placed in two separate layers like a bearer and joist arrangement allowing all building services to ‘weave’ in and out with zero beam penetrations.

“By eliminating beam penetrations the control of ﬁre spray coverage is also simpliﬁed both during and after construction. The approach allows construction to speed up from fabrication to installation with every process signiﬁcantly quicker.”

“Although comparable to conventional concrete cycle times, material time beneﬁt is realised by eliminating formwork support frames and back propping allowing services and ﬁnishes trades onto the open decks sooner than conventional construction methods,” he said.

“While steel construction is delivering time beneﬁts, it is also proving to be a safer method of construction with no Lost Time Injuries (LTIs) occurring on the project to date, which is particularly pleasing for Grocon as safety is a core value for our company.

“This improved safety can be attributed to the meccan- style installation method, simpliﬁed structural connections and signiﬁcantly reduced formwork back-propping.”

Peter Burns, Engineering Manager at the project’s prime steelwork contractor and ASI fabricator Paciﬁc Industrial Company (PIC), said the simplicity of the framing approach means that only 10% of the ﬂoor beams were undergoing fabrication work.

“The system and connections allow a high rate of steel installation with steel framing for a 1000sqm area of ﬂoor taking only two days to erect and only a further single working day for the laying of the Fielders RF55 steel decking,” he said.

“This approach has not only reduced the need for penetrations in beams but has also freed up building services for a lot more ﬂexibility, both during current construction and into the future,” Toscan said.

“The continuous primary and secondary beam arrays use smaller beams compared with a simply supported design, which, in turn, means less steel tonnage and also enables us to create far simpler steel connections.

“Beams can be connected more efﬁciently as secondary beams need only be rested and connected in bearing with a couple of bolts leading to a signiﬁcant reduction in crane time. Shear studs were only used sparingly, rather than abundantly as for an alternative composite design.”

He said the parallel beam system has been employed overseas, particularly in the UK and US, and technically and conceptually applied to the design of buildings in Australia such as the Brisbane International Terminal, but not in the same capacity as the Queen Street tower.

“The use of our in-house designed safety screen system has been a major advantage for PIC on the project. We are able to tailor the system for each project and are now ﬁnding signiﬁcant labour efﬁciencies in the repetitive climbing of the screens,” Burns said.

The use of steelwork that is delivered to site is controlled by one subcontractor. While there is still a crane being operated onsite it is generally a simple straightforward process to operate and manage in the hustle and bustle of inner Brisbane.

Key steel supplier on the project Liberty OneSteel provided a processing and delivery offer to cut and drill all long product and plate materials required for the project.

“Material is pre-ordered from mill rolling to reduce waste and enable efﬁcient nesting with delivery to site to match the speciﬁc order deﬁned by the site erection methodology,” he said.

“Stillages are preloading for efﬁcient site crane utilisation allowing for just one unloading movement per stillage.”

As the project is primarily only using one type of framing material in steel, the site is very clean and tidy compared with the site of a conventional concrete-framed building, which is difﬁcult to maintain when a lot of different formwork is being delivered and stored onsite.

Grocon engaged detailers to co-locate with Aurecon in their Brisbane ofﬁce to collaborate and produce a well-coordinated 3D model in order to mitigate possible coordination issues later onsite.

Starkey commented that while there are big positives with steel construction, there are still a number of factors that need to be addressed to ensure it is utilised to its full potential.

“Multi-level constructing being so crane-reliant means adequate craneage is required to complete the works while allowing crane time to service other trades,” he said.

To help address this, Grocon is using alternative lifting devices for certain components like the self-climbing perimeter screens, as well as reduced material component sizes to allow loading via hoists and after hours.

Grocon has been working with PIC and its self-climbing perimeter screen design to ensure all edges are adequately protected during and post concrete pour activities as the edge gap requires a different approach to conventional formwork.

“Design needs to be ﬁnalised in time to accommodate lead times without affecting the required installation dates,” he said.

“The knowledge learnt from this build will add to the experience already obtained from previous structural steel buildings created to ensure that Grocon is and continues to be an industry leader when it comes to structural steel construction.”